Principle of Operation of a Resistance Temperature Detector (RTD)

You are here:
News

“In addition to different materials, RTDs are also offered in two major configurations: wire wound and thin film. Wire wound configurations feature either an inner coil RTD or an outer wound RTD. An inner coil construction consists of a resistive coil running through a hole in a ceramic insulator, whereas the outer wound construction involves the winding of the resistive material around a ceramic or glass cylinder, which is then insulated. “The thin film RTD construction features a thin layer of resistive material deposited onto a ceramic substrate through a process called deposition. A resistive meander is then etched onto the sensor, and laser trimming is used to achieve the appropriate nominal values of the sensor. The resistive material is then protected with a thin layer of glass, and lead wires are welded to pads on the sensor and covered with a glass dollop. “Thin film RTDs have advantages over the wire wound configurations. The main advantages include that they are less expensive, are more rugged and vibration resistant, and have smaller dimensions that lead to better response times and packaging capabilities. For a long time wire wound sensors featured much better accuracy. Thanks to recent developments, however, there is now thin film technology capable of achieving the same level of accuracy.

“An RTD takes a measurement when a small DC current is supplied to the sensor. The current experiences the impedance of the resistor, and a voltage drop is experienced over the resistor. Depending on the nominal resistance of the RTD, different supply currents can be used. To reduce self-heating on the sensor the supply current should be kept low. In general, around 1mA or less of current is used. “An RTD can be connected in a two, three, or four-wire configuration. The two-wire configuration is the simplest and also the most error prone. In this setup, the RTD is connected by two wires to a Wheatstone bridge circuit and the output voltage is measured. The disadvantage of this circuit is that the two connecting lead wire resistances add directly two the RTD’s resistance and an error is incurred. 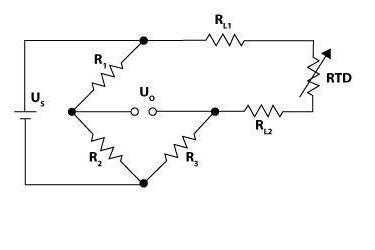 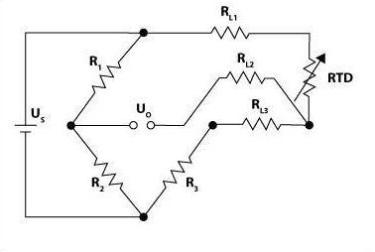 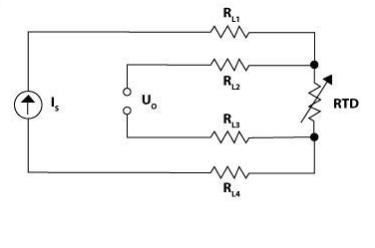 “In combination with the wiring diagrams shown, a more complex circuit is often employed. There are many different options for circuits when working with an RTD. The two most important features of this circuit are current generation and signal conditioning. “For purposes of linearity, it is important that the current generation circuit supplies a stable excitation to the RTD. Once a stable excitation current is applied to the RTD, the signal conditioning path of the circuit cancels lead resistances, gains the signal and converts the signal to digital using an ADC, which can then be read by a controller.

“There are many options when considering contact temperature measurement, including thermocouples, thermistors, and RTDs (wire wound and thin film). While thermocouples can handle very high temperatures and thermistors are inexpensive, there are many advantages of RTDs. “Some of these advantages include their accuracy, precision, long-term stability, and good hysteresis characteristics. Even beyond these, there are advantages of thin film RTDs over wire wound, including smaller dimensions, better response times, vibration resistance, and relative inexpensiveness. New advancements has even made thin film technology just as accurate as wire wound at higher temperatures ranges.” Original Source]]>
Go to Top