This is a type of temperature sensing device that uses two wire legs made from different metals welded at one end, creating a junction, this junction is the temperature measurement point,when the junction experience temperature change,a voltage is produced that can be correlated back to the temperature. The thermocouple alloys are commonly available as wire.It measures temperature between the range of -200°c to 2000°c.

This are also known as temperature sensitive resistor, Originally derived from combination of “therm”-ally sensitive res-“istor”. They are usually made of ceramic materials. Their great advantage lies in their swift response to temperature

These form of temperature measuring device works using thermal radiation. Infrared thermometer works using a lens to focus infra red light from one object onto a detector called thermopile, the thermopile then turns the infrared radiation into heat.

The more the infrared energy, the hotter the thermopile, this heat is then turned into electricity and then sent to a detector which determines the temperature of whatever the infrared thermometer is pointed to.[2]

A thermometer measures temperature by a change in the size/ length of the material when heated or cooled, material used include mercury and sometimes alcohol, this material are placed in a scaled glass, which indicate the temperature. Popular scales are done in Celsius, Fahrenheit and Kelvin. They are mostly used in clinics and hospitals.

Figure 5 : A mercury in Glass Thermometer[5]

This type of temperature sensing device are used in electronic devices. They work by exploiting the relationship between current and voltage in a diode; the diode used is usually the base-emitter diode of a bipolar junction transistor.[6]

This type of temperature sensor operates using the principle that resistivity of a material changes with change in temperature. Platinum is the most popularly used metal but others like copper and nickel are good options too. They operate between -100°c to 600° and there are two types in which they are constructed:
The wire wound type which are produced by winding wire into a coil on a suitable winding bobbing, the other alternative uses a thin film element which contains a thin layer of the base metal placed on a ceramic substrate and then laser is used to set it to the required resistance value.[7] 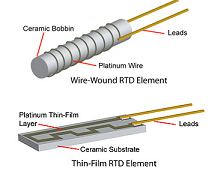 Sensing for most sensors require proper amplification to detect and correctly read signal, even though different sensors require different electronic circuitry to match their purpose. The thermocouple below uses series of differential amplifiers which  allow the reference and sense points to allow offset adjustments. 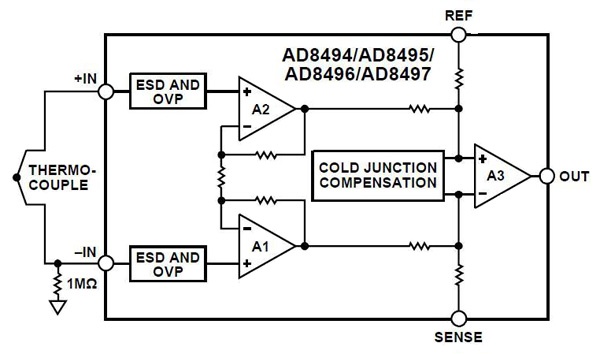 Figure 7: Semiconductor-based cold-compensation references can be built into the thermocouple amplifier. Here, a series of differential amplifiers allow the reference and sense points to allow offset adjustment. [9]

Also for a thermocouple bias and compensation is key, A way for handling this is to create a  create a voltage source calibrated to be 0 V at 0°C with slope equal to the Seebeck coefficients over the expected range of temperatures for a specific type of thermocouple. The resulting Thermocouple Compensator can now be used with any amplifier to create a linear temperature response biased to the voltage swing needed. The diagram below depicts that. 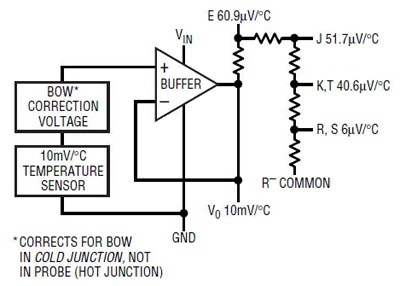 The circuit picture below shows a reference deign is the combination of differential amplifiers and different voltage reference levels. 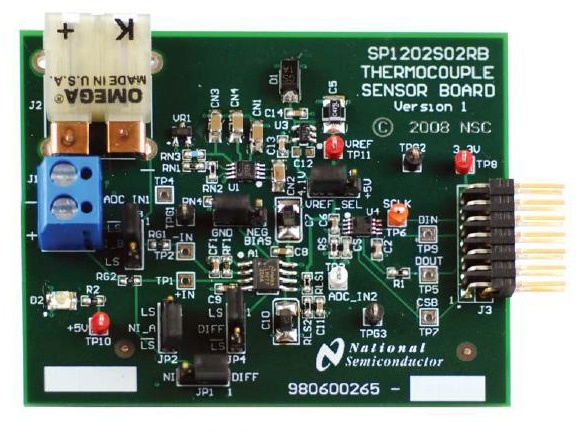 Figure 9: A reference design and eval board from National (TI) allows experimentation for single-ended and differential types of thermocouple amplifiers as well as for different voltage reference levels [9]