Temperature is the most widely sensed parameter of all physical parameters because of its significance on materials and processes at the molecular level. Temperature is a specific degree of hotness or coldness as referenced to a specific scale. Temperature is also defined as the amount of heat energy in a system or object. Heat energy is directly related to molecular energy: molecular energy is greater when the heat energy is higher.
Temperature sensors monitor the changes that take place in materials or objects as their temperature changes. Temperature Sensors can detect a change in physical quantity that corresponds to temperature change. The physical quantity can be anything like resistance or voltage. Electrical to thermal energy based sensors use the heating effect of a current through a conductor. Thermal to electrical energy based sensors will require a temperature difference to operate.

1. Bi-metal Thermostats or Bi-metallic Strips: As the name implies, a bi-metal thermostat consists of two different metals riveted together to form a compound strip. The two metal strips are bonded together under heat and pressure. The thermal energy can be converted into electromechanical motion by employing different expansion rates or linear expansivity on two metals. Linear expansivity or expansion coefficient of a material is a fractional change of length per degree change of temperature. When heated, a strip will bend because one metal has a higher expansion coefficient that the other. This bend can be sensed by any displacement sensor.

2. Bulb and Capillary Thermostats: They use capillary action of expanding or contracting of a fluid to make or break electrical contact. 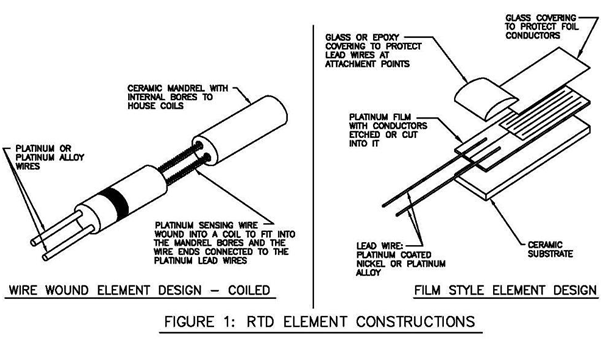 The sensing element should be positioned in such a way that it can reach the process temperature quickly. For applications where high vibration and shock are common, the wire wound device should be adequately secured. To measure resistance from a distance, extension wires between the sensing element and the instrument can be used. 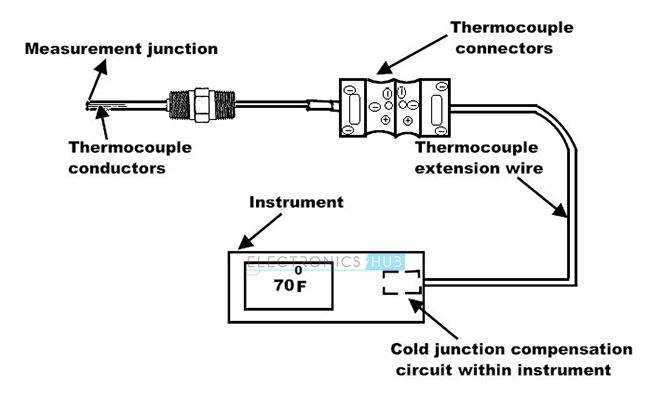 When the junctions are subjected to different temperatures, a current that is proportional to their temperature difference, will flow in the wire.
2. Silicon Sensors: the electrical resistance properties of semiconductor materials are used in silicon sensors. The resistance properties are taken in bulk rather than just the junction of differently doped areas. At low temperatures, silicon sensors provide positive temperature coefficient i.e. linear increase in resistance with an increase in temperature.
3. Infrared Pyrometer (IR Pyrometer): When the temperature is above absolute zero that is 00K, all the objects emit infrared energy. There is a direct correlation between the emitted IR energy and its temperature. Infrared sensors measure the IR energy emitted from an object and convert the reading to a voltage. The wavelength range of infrared is 4 to 20 microns. The output voltage is conditioned using a conditioning circuit to provide temperature reading. The factors that affect the accuracy of infrared sensing are reflectivity, transmissivity and emissivity. The measure of an object’s ability to reflect IR energy is its reflectivity. The measure of an object’s ability to transmit IR energy is its transmissivity. The measure of an object’s ability to radiate IR energy is its emissivity. An object is called a perfect reflector if its emissivity is 0.0. An object with an emissivity of 1.0 will emit or absorb 100% of the IR energy applied to it. 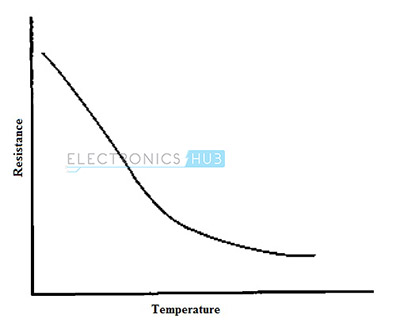 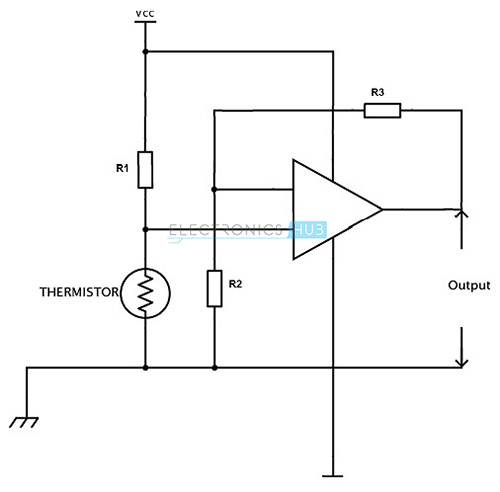 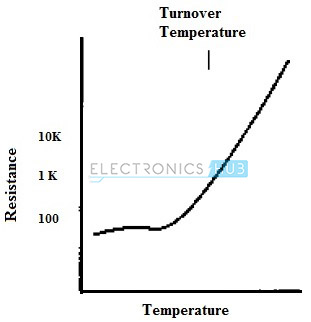 The direct usage of positive temperature coefficient thermistors is in very few applications because it is undesirable to have controlled current passing through the thermistor.
The construction of thermistors makes them the most sensitive of any temperature based sensors. Thermistors are inexpensive because they do not contain platinum. Thermistors are powered devices, i.e. they require external electrical input to function. Since thermistors are resistive devices, they generate heat in addition to the heat that is being measured. Depending on the construction, thermistors can be robust or fragile. Bead type thermistors have very thin lead wire that must be protected from vibrations and shocks.
The advantages of thermistors include low cost, fast response, small size and high resistance.
The disadvantages are self-heating, no resistance standards, requirement of additional circuitry to control application loads and low temperature exposure than thermocouples.

Thermocouples are the most commonly used sensing elements in thermal sensors. A thermocouple consists of two conductors of dissimilar metals. The principle of a thermocouple is that these two metals always have a contact potential between them and this potential changes in temperature. To measure the contact potential, two connections or junctions in a circuit are required. These junctions are called hot junction or measurement junction and cold junction or reference junction. The hot or measurement junction is exposed to a process temperature and the cold or reference junction is maintained at a known reference temperature. When the junctions are at different temperatures, a current will flow in the wire that is proportional to the temperature difference and the voltage can be detected. Generally, the voltage will be in the order of a few milli volts. If the temperature at two junctions is same, the output voltage is zero. When the temperature at a junction is increased, the output voltage increases until it reaches a peak value. The characteristic curve of a thermocouple is shown below. 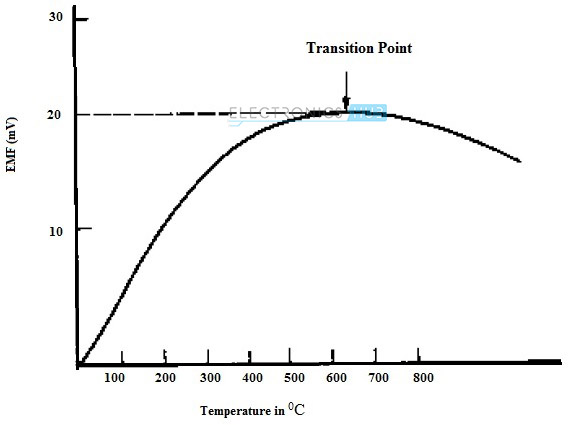 From the above characteristic curve it is clear that a thermocouple is useful only over a certain limited range of temperature. This is because of the non-linear shape of the curve and the reversal of the curve that takes place at temperatures that are higher that the transition point or turn over point.
The working of a thermocouple is based on three effects: Seebeck effect, Peltier effect and Thomson effect.
To calculate the EMF, thermocouples make use of Seebeck effect. According to Seebeck effect, the EMF in a thermocouple is given by the following equation.
E = a + bθ + cθ2
Where a, b and c are constants for the types of metals used in the thermocouple and θ is the temperature difference between them.
If the cold junction is maintained at 0 0C, the EMF is
E = αT2 + βT
Where α and β are the measured constants for the pair of metals and T is the difference in temperature.
When the temperature is below the transition point, the value of α is usually small and neglected. So the EMF is almost directly proportional to the difference in temperature.
According to Peltier effect, when two dissimilar metals are joined to form two junctions, an EMF is generated in the circuit due to the temperature difference between two junctions.
According to the Thomson effect, when two dissimilar metals are joined to form two junctions, a potential exists in the circuit due to the temperature gradient along the length of the conductor.
When a current flows through a conductor whose ends are maintained at different temperatures, certain amount of heat is released at a rate that is proportional to the product of the temperature gradient and the current.
The working of a thermocouple is explained below. 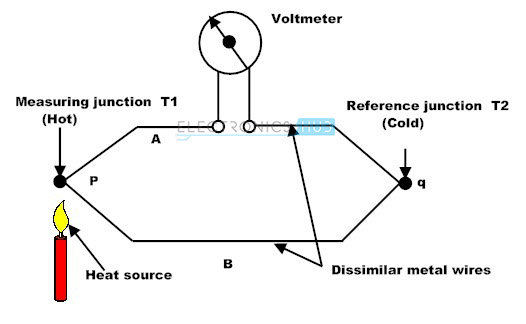 The other commonly used types are Type B which is similar to Types R and S but with lower output and Type N which is used as a substitute to Type K where it has a shorter life and stability issues.
Because of the usage of different combination of materials, the thermocouples produce high output voltages at different temperatures and the output voltage curve is nearly linear. Hence the thermocouples are easy to interface with a controller.
There are three types of junction styles used in a thermocouple: grounded, ungrounded and exposed junctions.
In Grounded junction, in order to protect the hot or measurement junction, it is welded to the inside of a protective metal sheath. This might affect the thermal response, but makes it susceptible to electromagnetic interference.
In Ungrounded junction, a thermally conductive material is used to electrically insulate the hot junction from its protective metal sheath. This isolates the junction from electromagnetic interference, but increases thermal lag.
Exposed junction has the fastest response time. In this junction type, in order to form the hot junction, the sensing tip is made from two dissimilar wires joined by soldering, and welding.
The advantages of thermocouples are its small size, rapid temperature response, inexpensive, wider temperature range and durable to vibrations and shocks.
The disadvantages are its less stability at higher temperatures, requirement of extra protection from corrosion, the requirement of additional circuitry to control application loads and the use of special extension wires. 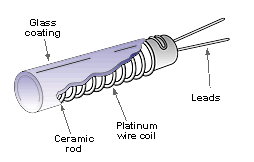 Although several materials like Nickel, Copper can be used in the construction of a resistance thermometer, Platinum is preferred because of its considerable advantage of being the reference material for International Standards, used in the range -270 0C to 660 0C. Platinum also has the advantage of being resistant to corrosion, having almost linear resistance – temperature relationship over a wide range of temperatures and it can be prepared in a very pure state. Platinum is a very stable material in terms of both electrically and mechanically. So the drift of resistance values due to aging of the material is negligible.
Originally, Platinum – Resistance thermometer is a bulky piece of equipment, but miniature versions are available. Even though they are small, they combine the accuracy of the Platinum – Resistance principle with the ability of Platinum to withstand corrosive environments.
The sensing element in a Resistance thermometer is made of a length of fine coiled Platinum wire wrapped around a ceramic rod. The resistance of the wire varies with temperature and is measured by passing a current. The voltage is measured using a suitable bridge. A 2 wire or 3 wire or four wire arrangement is required when terminating the resistor in sensing element with extension wires. The value of the resistance of the external lead wire should also be taken into account. This is accomplished by connecting the lead wire to a Wheatstone bridge.
A simple 2 wire Wheatstone bridge circuit used for resistance thermometer is shown below. 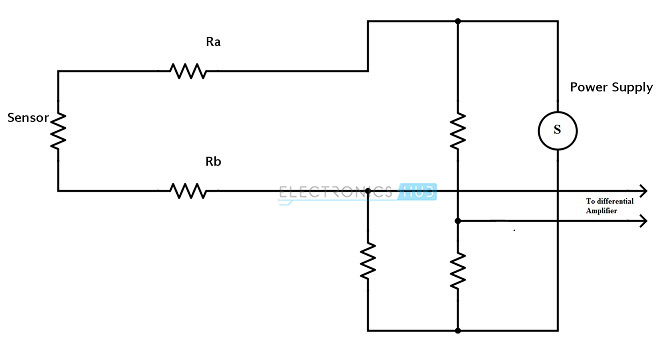 The resistances of the lead wires Ra and Rb are measured along with the resistance of the sensor.
Three wire arrangement is shown below. 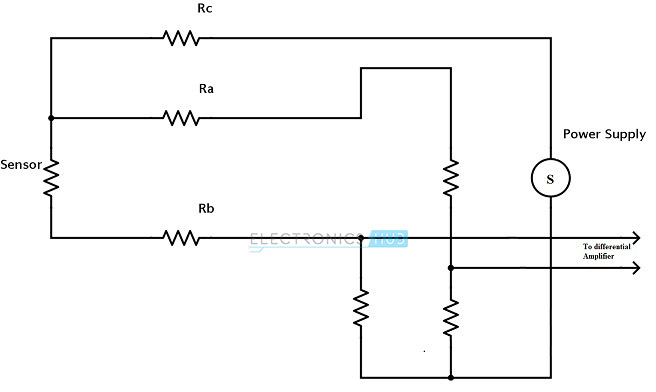 The wires used to connect the sensing element and measuring instrument are made of Nickel, alloys of Nickel, Silver plated Copper, tinned Copper and Nickel plated Copper. These wires are insulated with materials like PVC, Teflon and fiberglass.
The sensing element and the lead wires are inserted into a closed end steel tube which is packed with ceramic powder which acts as vibration damping or heat transfer material.
Since these are resistance devices, mass and self-heating of the device must be taken into account.
The advantages of resistance thermometers are resistance linearity, accuracy, repeatability, larger output voltages than thermocouples and wide range of temperature.
The disadvantages are higher cost and larger size than thermocouples, self-heating and less durable in high vibration environments.