A temperature sensor is a device that gathers data concerning the temperature from a source and converts it to a form that can be understood either by an observer or another device. It measures the temperature of a medium. The sensors are used for different purposes from the simple home use to extremely accurate and precise scientific use.

The best well known example is mercury-in-glass thermometer. The mercury in the thermometer expands and contracts on the change in temperature. As the volume change is quantified the temperature is measured with a fair degree of accuracy. These temperature sensor are used from home to the university labs for the temperature measurement.

Even human and most animals  have biological temperature sensors in their body which works as the same function as the artificial does. It collects data and transfers it into a understandable form. For eg: human sensory nerves sends sensory information from the skin to the brain in the form of electrical impulses.

Types: Temperature Sensors measure the amount of heat that produces from the object. It detects the changes of the temperature either as output of analog or digital. The temperature consists of two basic types of features:

This is a type electro-mechanical temperature sensor, which is consists of two different types of metal; for example nickel, copper, tungsten or aluminum. These are bonded together to make a bi-metallic strip.

When this is connected with cold object, the two metals are closed together and current passes through the thermostat. When it gets hot, one metal expands more than the other and the bonded bi-metallic strip bends up (or down) opening the contacts preventing the current from flowing.

Snap-action type thermostats are commonly used in our homes for controlling the temperature set point of ovens, irons, immersion hot water tanks and they can be found on walls to control the domestic heating system. But it has large hysteresis range on the opening and closing of electrical contracts. For example, a thermostat set for a nominal 20°C might open at 22°C and close again at 18°C.  This leads to undesirable temperature swings which can nullify the use of a thermostat.That’s why commercially available bi-metallic thermostats have temperature adjustment screws, by which it is possible to adjust the temperature at desired level and pre-set hysteresis level.

Creeper types generally consist of a bi-metallic coil or spiral that slowly unwinds or coils-up as the temperature changes. Since,sensitivity depends on the length of the strip, this type of sensor allows for much greater sensitivity.

Thermocouples are the most common temperature measuring device. It consists of two dissimilar metals, joined together at one end.

Thermocouple works on the basis of Seebeck effect .If two conductors of different materials are joined at one point, an EMF (electromotive force) is created between the open end which is dependent upon the temperature of the junction. As T1 increases, so does V. The EMF also depends on the temperature of the open ends T2. The junction is placed in the process, the other end is in iced water at 0C. This is called the reference junction. The voltage is directly proportional to temperature. 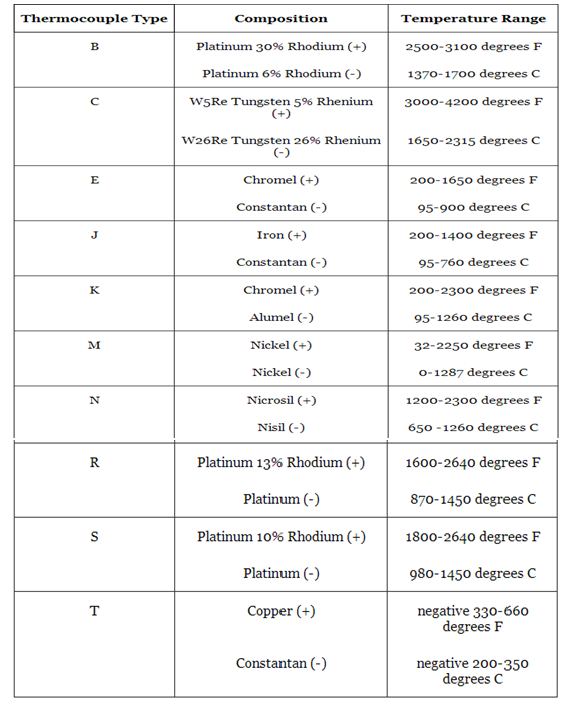 A thermistor is type of resistor whose resistance varies significantly with the temperature.  it is constructed of semi conductor material with a resistivity that is especially sensitive to temperature.

A thermistor is a type of resistor whose resistance varies significantly with temperature. Thermistors use internal electrodes that sense surrounding heat and measure it through electrical impulses. They also help to control heat to some extent, usually causing the device to which they are attached to heat up much more slowly than it normally would. The material used in thermistor is generally a ceramic or polymer. There are two kinds of thermistors: NTC (Negative Thermal Coefficient) and PTC (Positive Thermal Coefficient). With the former, the resistance of the thermistor decreases as the temperature increases, and with the latter, the resistance increases as the temperature rises.

The basic mathematical model used for thermistors is the Steinhart-Hart equation, discovered by oceanographers I.S. Steinhart and S.R. Hart. In its simplest form it is:

where T = temperature, a,b and c = coefficients that are measured, R= resistance in Ohms.

1) Thermistors are used to regulate temperature in various household appliances. Most electronic appliances found in the home use both PTC and NTC thermistors.

2) Thermistors are installed on these appliances to control their temperatures. This prevents them from going beyond a set temperature range.

3) Modern appliances, communication tools and accessories like mobile phones, computers, LCD displays, CPUs, rechargeable batteries, and medical and patient monitoring equipment are all equipped with thermistors so they can be used continuously without fear of overheating and appliance damage.

RTD stands for Resistance Temperature Detector. RTDs are sometimes referred to generally as resistance thermometers. An RTD is a temperature sensor that measures temperature using the principle of the resistance of a metal changes with temperature.In practice  a small electric current transmitted through a piece of a metal which are  platinum ,copper or nickel(the rtd element or resisitor ) located in the area where temperature is to be measured.The resistance value of the RTD elements then measured by an instrument. This resistance value is then correlated to temperature.They are used  in many industrial applications below 600 °C, due to higher accuracy and repeatability. Platinum is the best metal for RTDs because it follows a very linear resistance-temperature relationship and it follows the R vs T relationship in a highly repeatable manner over a wide temperature range.The unique properties of platinum make it the material of choice for temperature standards over the range of -272.5 °C to 961.78 °C, and is used in the sensors that define the International Temperature Standard. Platinum is chosen also because of its chemical inertness

Ohm’s Law: V=IR. This can be re-arranged to I=V/R. This states that the current (I) through a circuit is equal to the voltage across the circuit (V) divided by the resistance in the circuit (R). Since I is inversely proportional to R, then for a fixed V, the current will decrease as the resistance increases. One of the things which increases electrical resistance is the increased motion of the molecules and free electrons of a conductor caused by heating. This is due to their random collisions with the electrons making up the current which tends to interfere with their forward progress. So, it is true that heating of the metal(resistance element)  causes the free electrons to move faster, but in random directions. As a result, the net electron current will be diminished due to the increased frequency of random collisions.From the figure below shows that when a resistance element come in contact to a higher temperature where there is a constant current flow through the circuit, the collision or movement of the electrons increases and the same way the electrical resistance also increase but the current will deceases at the end side of the resistance element.The change in electrical resistance of the metal when there is a temperature difference at different situation sensed and measured.

The relative change in resistance (temperature coefficient of resistance) varies only slightly over the useful range of the sensor. The R vs T relationship is defined as the amount of resistance change of the sensor per degree of temperature change. Then estimate of RTD sensitivity can be noted from typical values of  the linear fractional change in resistance with temperature. For platinum, this number is typically on the order of 0.004/°C, and for nickel a typical value is 0.005/°C. Thus, with platinum, for example, a change of only 0.4 W would be expected for a 100-W RTD if the temperature is changed by 1°C. Usually, a specification will provide calibration information either as a graph of resistance versus temperature or as a table of values from which the sensitivity can be determined. For the same materials, however, this number is relatively constant because it is a function of resistivity.